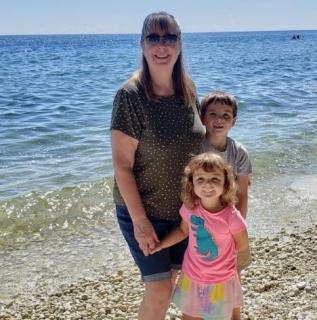 Time to Celebrate Margaret Williams and her 20 years of professional service to Scouting!

Time: 12 pm to 4 pm. Heavy hors d'oevres will be served alongside a cash bar.

Cost for attending will be $15 and pre-registration by September 2nd will be required.

Please consider helping Margaret enjoy her retirement to the best of her ability! Council will be collecting donations for a cash retirement gift. If you would like to donate there will be an option for you to make a donation and we will present that to Margaret even if you cannot attend.

We are looking forward to seeing everyone and celebrating Margaret's years of service to Scouting. Below is the full retirement announcement.

Congratulations to Margaret Williams on her Retirement!

Margaret’s Scouting career started as a volunteer when her son, Dan, registered for Pack 424 as a second-grader in Monona, WI. She talked with the Cubmaster, and he said, “I would love to have your son in the Pack but all our dens are full. The only way he can join is if you sign up to be the Den Leader.” Three weeks later she had 6 boys at her first den meeting. She discovered one of the dads was an Eagle Scout and had found her replacement for the next year. She stayed active as a member of the Pack’s committee until they moved to Sun Prairie and Dan crossed over to Troop 333. She thought her time as a volunteer was done, but two months in, the Troop asked her to be an Assistant Scoutmaster working with the new Scout patrol. She eventually moved to the Troop committee helping with advancement and fundraising. She also volunteered at the district level assisting with Friends of Scouting and training.

In 1998, Guy Eichstaedt, Assistant Scout Executive for Glacier’s Edge Council asked her to lunch. And so began her 20-year professional Scouting career. She served as Yahara District Executive for about 2 years before she left the profession and went to work for other non-profits in fundraising. She continued to be an active volunteer in the Yahara District and received District and Council awards, including the Silver Beaver in May of 2004.

In 2004, while working in Elgin, IL as the Development Director for the Boys and Girls Club, Chuck Dobbins, Scout Executive called her about an opportunity at Four Lake’s Council. She interviewed Glen Steenberger and came back to serve Yahara District in July. She helped with the Council consolidation meetings and the formation of the Glacier’s Edge Council. She moved into the Finance Director position in January of 2007. In 2008, she transferred to Milwaukee County Council as Root River District Director and again worked with Glen Steenberger. As she had experience in helping with the consolidation in Madison, she was tapped to help with the consolidation process in Milwaukee and the formation of Three Harbor’s Council. She started to take on more Council program responsibilities and moved into the Fox River District Director/Council Programs role until the spring of 2015.

April 2015, she came back to Madison to serve as the Development Director for Glacier’s Edge Council. She then was asked to take over as Wisconsin River District Director, and then again to Mohawk District as District Director. Alongside her current role serving as District Director for Mohawk District, she is the Council Staff Advisor for Wood Badge Training and GEC’s largest annual service project, Scouting for Food. Margaret also helps lead Council fundraising campaigns, including the Popcorn sale, Wreath sale, and Flower sale. The Flower sale grew from $60,000 to $96,000 in 2021 under her direction.

She has appreciated working with great volunteers over the past 20 years. She enjoys seeing the new Lion Cub Scouts enter the Scout Shop for the first time to try on their first Scout uniform, and not wanting to take it off as it is being rung up at the register. Watching Scouts in action at Day Camps, Camporees, and Summer Camp while simultaneously learning and having fun is another fond memory.

Margaret is mother to Eagle Scout, Dan Williams. Dan is married to Becky, and they have two children – Tony and Julianna. When she is not working, she loves to spend time with the grandkids and kids. Now that the grandkids are getting older, they like to hike, visit parks, and have been kayaking while in Door County on summer vacation. She visits local farmers’ markets and has been growing vegetables in containers on her deck for the past few years. In true Wisconsin fashion, she also enjoys Friday night fish fries with good friends.

She is looking forward to the next adventure wherever that may lead her.

Margaret's last day will be Wednesday, August 31st. On behalf of our Council, Executive Board, staff, volunteers, and Scouts we thank Margaret for her dedication, skill, and passion as we wish her our very best.