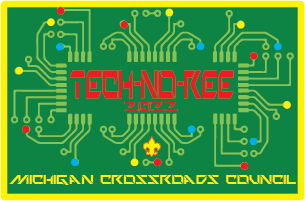 Science, Technology, Engineering, Math and Techno Detroit will be the subject of this Camporee. Each Participant will be immersed in Technology and Innovation while they complete activities built around STEM, Detroit Techno, and Scouting Fun. Big activities to include Blinky Badges, Shooting Sports, Adventure Point's Climbing Wall and Saturday evening Fuse Detroit Techno Show!

DETROIT TECHNO: These early Detroit techno artists employed science fiction imagery to articulate their visions of a transformed society and created a recognized sub-genre of Techno. This vibrant dancefloor genre was filled with rich synthetic string arrangements and took the underground music scene by storm in May 1987. It "hit Britain in an especially big way during the country's 1987 to 1988 house explosion." According Detroit TECHNO artist, Frankie Knuckles, " It just exploded. It was like something you can't imagine, the kind of power and energy people got off that sound was huge." What distinguishes Detroit Techno from its European variants is the way it more directly works the interface of funk and futurism ... but the desire to play up the genre's futuristic side often means the funk half of the equation gets dropped.

Scouts come and feel funky AND futuristic at the Tech-No-Ree!

Annual Health and Medical Form A & B